“The Emily Blind Lake ATV Trail is a 16-mile multi-use trail connecting the Emily Outing ATV trails with the Blind Lake Connector ATV trail and the Northwoods regional trail system. From the east and the City of Emily, the trail winds its way around Lake Emily and then travels through the tall red pines of the Emily State Forest. You will cross above a wetland on a 200-foot elevated bridge, ride over 2200 feet of wooden boardwalk, and pass through low areas and black spruce swamps. The trail is heavily wooded, and winds its way through the forests of rural Crow Wing and Aitkin counties. Use the Selfie Station at mile marker 7 to capture your ride.”

Click on the link below to be directed to the new trail map.

HILL CITY — It’s only mid-June, but Harlan Kingsley already has more miles on his Polaris Ranger ATV than he put on all last summer.

“This is just such a great trail. I should be back at the shop but I keep getting pulled out here,” said Kingsley, who owns an ATV sales and service business in this Aitkin County town.

Our group of three ATVs was bopping down a hilly, switchback-strewn trail under a canopy of tall maple trees in the shadow of Quadna Mountain south of town last week. We were on a 25-mile ride that also would take us through willow and ash swamps, mature oak forests, pine plantations, aspen cutovers and boggy savannahs, and across creeks and rivers.

The new trail we were traversing on that cool June morning is the result of legislation at the state Capitol way back in 2006. Lawmakers at the time ordered an at-least-70-mile ATV trail be developed somewhere in the state. The trail was intended to offer anxious ATVers a designated place to ride in exchange for their license fees and gas taxes paid, and to satisfy ATV critics who said the machines don’t belong trailblazing across the state’s forests, damaging ditches and trespassing on private property.

Minnesota lawmakers put the Department of Natural Resources in charge, and Aitkin County jumped into the bidding with a plan to link several small ATV loops together with the Soo Line Trail and a new trail system.

The result, about six years later, is called the Northwoods Regional ATV Trail

Ride with us in the wild! 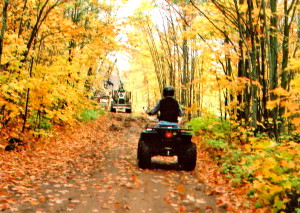 System — a more-than-$1 million effort that’s now ready for what organizers hope is an influx of ATV trail riders and tourism dollars.

The Northwoods trail system formally opened this month with a ceremony that marked completion of the latest 37-mile segment from Hill City to Blind Lake near Aitkin. The Northwoods system is officially about 90 miles of uninterrupted trail, of which 77 miles is in Aitkin County and the rest in Itasca County.

But because the new trail provided several missing links between existing trails, there are about 420 miles of ATV trail now connected, by far Minnesota’s largest network of contiguous ATV trails.

It’s now possible for ATV enthusiasts to ride from near Grand Rapids in the north to Onamia, south of Mille Lacs Lake, and from Remer in Cass County in the northwest to Moose Lake in the southeast. And there are plans to extend the system farther north, to Pengilly, and potentially east into Carlton County.

Suddenly, Aitkin County has become the epicenter of designated ATV trails in a state with more than 300,000 registered ATVs and riders ready to spend money on gas, food and lodging. There’s talk of recruiting ATVers from other states, older birders to make ATV-access birding trips here, and even promoting ATV-based geocaching.

“We’ve now got 209 miles of designated ATV routes in Aitkin County alone. We see this as an economic development potential, for this to become a tourism draw,” Aitkin County Land Commissioner Mark Jacobs said. “I’ve had a group Illinoiscalling me who are planning a trip in October…. We’ve run into people from Missouri already on the trail. The word is getting out.”

Managing riders and the resource

Northern Minnesota county land commissioners traditionally have been charged with forestry management and selling trees to loggers. Now, providing and managing recreation has become an increasingly important part of their jobs.

“For us, this is a critical land management issue. Not only to provide recreation, but to end the undesignated use (of ATVs) on areas where they probably shouldn’t be and get them onto trails that are designed to take this kind of use,” Jacobs said.

Indeed, all along the Northwoods trail system are signs reminding riders to stay on the trail. Even though most of the trail winds through public land — 96 percent is on state or county forest land — planners want ATVs to stick to the trail. That was the goal of the so-called 70-Mile Trail Committee that has met dozens of times over the past five years to make the Northwoods system a reality.

“It took snowmobiles from the (19)60s into the ’80s to develop a good name for themselves, and it was the trail system, when it got well-developed, that really did that,” Kingsley said. “ATVs are starting to get a better name for ourselves now, and trails like this are going to help. We needed to put people on a trail system where they belong and not out in the woods tearing things up.”

The Northwoods system allows Type I and II ATVs (four-wheelers and their larger side-by-side cousins) as well as motorbikes. Larger off-road pickups and Jeeps are not allowed.

Some sections of the trails are built on old logging roads, and connect down a few county road ditches and dry-land sections of snowmobile trails, along with the old Soo Line railroad grade. But there’s also a lot of newly-blazed trail, designed especially for ATVs. Soft areas have been hardened with gravel in some spots. Culverts have been placed at key points. And thousands of feet of boardwalk were built over sensitive wetlands. The official wetland mitigation, or impact, for the entire system was less than an acre.

“They really put a lot of thought into this. It’s designed for trail riding, not ripping things up. It keeps people interested, keeps them from trying to fly through,” Kingsley said, noting the average speed is about 15 mph. “You don’t make time out here. Which is just fine.”

The trail, sponsored by Aitkin County and maintained by a local ATV club using state money set aside for trail efforts, will be open from mid-May to Oct. 31 for trail riding, and then in November for hunters. The season is aimed at avoiding early spring erosion problems, and preventing conflicts with snowmobiling and other activities in the late fall and winter.

Ken Rollins of Hill City, president of the new Northwoods Quads ATV Club, brought his grandson Cody Selger along for our ride on the trail. It was the third time Rollins had been down the same trail in the previous few days, but he didn’t mind.

“I never get tired of it. It’s such an interesting trail, the way they designed it, you see something different every time,” Rollins said. “And it’s great to get Cody out. He never misses a chance to take a ride.”

Word is spreading about the new trail, and even on a weekday morning there was some traffic. The trail draws a mix of traditional four-wheelers and the now hugely popular side-by-side models that can carry two or more people. Kingsley said those larger, Class II ATVs now account for about 70 percent of his sales.

“This is awesome. It’s a great trail from what I’ve seen so far. I know I’m going to be on it a lot,” said Kent Olsen of Palisade. Olsen was leading a group of three four-wheelers on a section of the trail near the little village of Swatara with his daughter, Charlotte, on back of his machine; friend Marsha Hasskamp and Everett Olsen on another machine; and friend Liz Eddy on the third.

“It’s great to be able to get on and go and have some new places to see,” Olsen said. “We really needed something like this.”